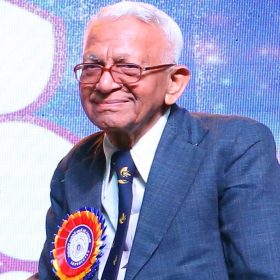 He was commissioned on 26th Jan 1950 and retired in August 1982. He passed B.Sc and M.Sc from the Royal Institute of Science, Bombay.  He passed M.Sc in 1948 and joined Indian Air Force (IAF) in Administration Branch in 1949.

In 1967 he served as Wing Commander at Air Headquarters, where he was responsible for a broad spectrum of subjects such as  recruitment, training etc. of the airmen. He displayed great diligence & insight and achieved a high degree of efficiency in various aspects of the administration of airmen.

He displayed qualities of exceptional devotion to duty & willingness to work under conditions of stress, regardless of personal convenience. He rendered distinguished service of a huge order for which he was rightly awarded the VSM (Vishisht Seva Medal) in 1972.

After retirement he settled in Sainikpuri, Secunderabad.  He was the Joint Honorary Secretary of Sri Ramakrishna Vidyalaya from 1983 to 1989.  Thereafter, when Sri Ramakrishna Vidyalaya merged with Bharatiya Vidya Bhavan, he continued as Honorary Secretary till 1994.  Later in 2009 he was invited to join Bharatiya Vidya Bhavan, Sainikpuri Kendra as Emeritus Vice Chairman. Since 2013 he has been the Vice Chairman of the Sainikpuri Kendra.